You may be looking for the other Zhaka Mu. 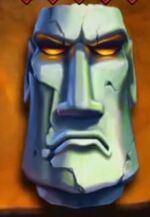 Zhaka Mu is the leader of the Tiki Gods and the main antagonist of Zuma's Revenge!. 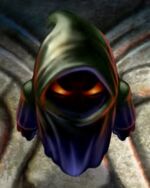 The true Zhaka Mu is the leader of all the Tiki Gods that appears after Zuma defeats Drumstick Willie the Chicken Man Cocinero (or the Chef as he calls him) or after the fake credits play. The real Zhaka Mu's appearance is an Easter Island Moai Head masked devil. After you shoot him until his HP left 1/2, Zhaka Mu turns into a devil. When Zhaka Mu is defeated, he will turn into a spirit in which it enters Zuma's body and at the same time he will come out of it and he turns into the Shadow Frog which is the evil version of Zuma. When Zhaka Mu (as a Shadow Frog) is defeated, Zuma then rescues Mrs. Zuma. The real credits will also play. During the credits, Zhaka Mu is shown again, in Moai form, and appears to be on good terms with Zuma and his friends. 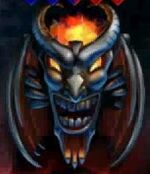 Zhaka Mu's collision is very hard like Moai or Demon. His Moai form throws fireballs. In addition, there are hula girls who throw energy balls, which slows down Zuma. After Zhaka is hit after a few shots, he explodes himself to be a demon. Zhaka also shoots fireballs from his head, which is on the ground. If Zuma touches the fire, he gets burnt. Like Demon, he gets bezerk after a few shots.

Zhaka Mu's final form is extremely hard. Zhaka shoots balls at Zuma, which can damage him for a short time. If Zhaka is hit a few times, he moves back and Zuma must shoot him after shooting the balls. When his health is below 50%, he'll be bezerk by shooting more balls. He also moves in the opposite direction of yourself (for example: if you move right, he will move left and if you turn left, he will turn right). If Zhaka Mu is defeated, he will explode and Mrs. Zuma is saved.

Community content is available under CC-BY-SA unless otherwise noted.
Advertisement